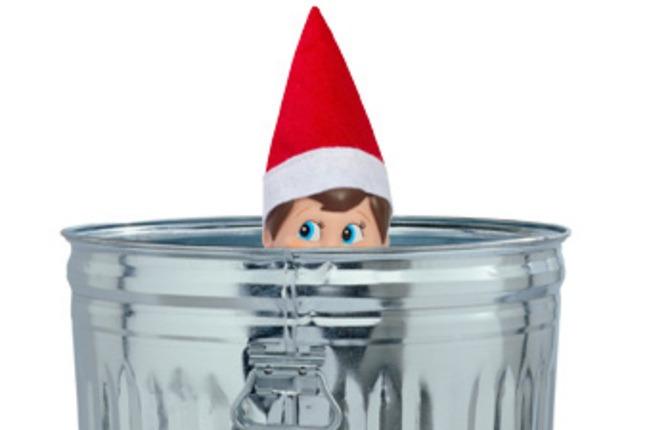 He seemed rather innocuous when we received him. A little guy in a red suit sat in a festive green gift box, accompanied by a picture book. I read aloud from the book about our Elf on the Shelf as I cuddled with the kids in our big, comfy chair. I’m sure we looked just like the ideal family in the picture from a Christmas card.

I held the little elf with the strangely boneless body, gazing into his hard plastic face. According to the book, the elf would watch over my kiddos and remind them to be good throughout the month of December. At night he would fly back to the North Pole and report the children’s behaviour to Santa Claus. Then, in the morning when the little ones awaken, he would be in a different place in the house. He might be in the bathroom to make sure they brush their teeth, for example. Or perhaps he would double as the dining room table’s centrepiece, making note of who ate their veggies. This passive bribery seemed like a good idea at the time. Anything to get through the Christmas season. But I had no idea what horrors the next days would bring.

On December first, the children happily greeted the little elf as he sat on the top of the TV. I’d placed him there the night before to remind them of their screen-time limits—a major point of contention between parent and children. To my amazement, that afternoon, they obediently turned off the TV when I asked—the first time. All was well. That night I moved the elf to the kids’ bathroom and left him perched on the sink. My oldest was a little creeped out. Was he watching her go potty? But the younger ones brushed their teeth with extra care. On the third day, I felt especially clever when I tied the elf’s floppy red legs in a bow and hung him upside down from the coat rack, to remind the kids to hang their jackets instead of leaving them puddled on the floor. I was feeling pretty proud of myself. That is, until my youngest came home from school.

“Our elf is boring!” he exclaimed. Confused, I asked why. “Johnnie’s elf is naughty,” my son said. “His elf drew moustaches on the family picture this morning. They found him with a marker in his hand!”

“Yeah!” said my middle child, picking up the story. “And Isabelle’s elf threw toilet paper all over the bathroom!”

“Well, those elves are obviously not setting a good example,” I huffed. “The book says he watches over you and reports to Santa. Period.”

I adamantly refuse to invent any elf hijinks! I thought.

Each night, I waited until the kids were asleep, then I moved the elf to a new spot. I put him by the bookshelf to remind them to read, and in each child’s bedroom in turn so that they would stay in bed.

Unfortunately, I also repeated the bathroom sink, once again freaking my oldest out. It was exhausting.

By the fifteenth, Christmas chaos was in full swing and the inevitable happened. I forgot to move the elf. That morning, as I clutched my coffee cup in one hand while pouring cereal with the other, I heard, “Hey, the elf is in the same spot as yesterday!”

“Maybe he was tired?” I ventured.

My middle child pointed a finger at the youngest. “You touched him, didn’t you!” she accused. “Mommy!” she yelled. “He made the elf lose his magic!”

“What?” I asked, befuddled and barely awake. “What do you mean?”

“Mommy,” she said with exaggerated patience. “The book says if a kid touches the elf he loses his magic.” A lone tear ran down her chubby, little cheek. “CHRISTMAS IS RUINED!”

The oldest jumped in. “Are you sure you didn’t touch him?” she asked the middle child. At this point, both of the younger kids were crying, all three were fighting, and we hadn’t even had breakfast yet.

“I know!” I exclaimed. “Maybe the elf forgot to reset his watch to Seattle time. He’s still on North Pole time!”

“But he’s not wearing a watch,” my youngest sniffed.

“I meant his internal clock!” I said, desperately. “I’ll bet when you get home from school he will have moved.”

I managed to calm everyone down, and when the kids arrived home that afternoon, the elf had indeed moved to a different viewing area. Crisis averted. Or so I thought.

“Sophie’s elf used garland as a zip line!” my oldest chimed in.

What the heck? I thought. That wasn’t in the book.

That night, I researched Elf on the Shelf ideas in the Internet. My mouth fell open as I perused Pinterest. I scrolled through pictures of elves wearing tiny little homemade clothes, creating edible bracelets made with cereal, having marshmallow snowball fights with Barbie, and decorating everything from the house to the tree. My anger grew.

I held the elf in my fist, the cheap fabric on his body already pilling. Whose idea was this? Like I didn’t have enough on my plate with the decorating, shopping, wrapping and other items on my ever-expanding Christmas To-Do list! Now I was supposed to not only remember to move the stupid elf each night, but also set up little elf tableaus.

Oh, I’ll do something creative with our elf, I fumed. Like put him through the paper shredder. Or perhaps he could bungee jump with a candy cane and a licorice stick into the burning flames of the fireplace!

That night, instead of sugar plums dancing through my head, I dreamed of evil elves stomping on my Christmas dreams.

A few nights later, my youngest walked in and saw the elf lying face down on the rug. I’d tossed him there after realizing I’d run out of ideas. And besides—I swear he was mocking me.

“No, baby,” I soothed. “The elf is just taking a break!” Then I patted my baby’s head, gave him a drink and sent him to bed. I was starting to empathize with the Grinch. Only instead of my heart growing three sizes, it was shrinking.

I started marking the days of the calendar with big, red “Xs.” The kids thought I was marking the days until Christmas, but I was really counting down until I could get rid of the little red bastard. My husband accused me of getting “obsessed.” He was right.

We made it through December twenty-fifth with the elf doing nothing more exciting than sitting around, much to my children’s disappointment. Immediately after Christmas, I wrapped the demon elf in the crumpled wrapping paper and disposed of his body in the bottom of the garbage can. It had to be done. I didn’t know what I would tell the kids, but I had 11 months to think about it. At least for the time being, the elf was dispatched and all was well.

On January sixth, a package arrived. My youngest recognized his name on the packing label, and tore into the box before I had a chance to look it over. I opened the card he had tossed aside, and read as his ripped open the box.

“I saw this cute little guy, and I just couldn’t resist!” Read the note from my aunt. “I’ll bet your kids will have so much fun with… ”

“Mommy!” My son exclaimed. “It’s another Elf on the Shelf!”