Boosting confidence one t-shirt at a time 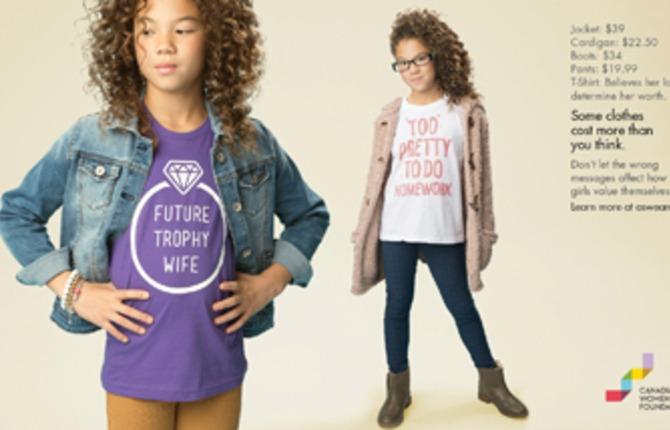 Boosting confidence one t-shirt at a time

With the slogan ‘some clothes cost more than you think’, the Canadian Women’s Foundation (CWF) is striving to empower girls to think critically about gender stereotypes, challenge sexist media messages, and to find their voice.

The As We Are Campaign launched on International Women’s Day, aims to bring light to the concerns surrounding the messaging that girls and boys are receiving.

“There is some research that indicates kids are consuming 10 hours of media per day,” said Beth Malcolm, director of the Girls’ Fund at Canadian Women’s Foundation. “That is more time than they’re in school, so we really need to teach them how to be critical when it comes to understanding the messages they are receiving.”

The project was conceptualized in 2015 when Malcolm was speaking with a Toronto-based teacher about the messages that children are inundated with.  The teacher had recently run an activity in her class where the kids created t-shirts, and through this activity she found that the children carried themselves differently when they were wearing a t-shirt with a message they created versus the messaging on already existing t-shirts.

Utilizing this concept, the Canadian Women’s Foundation with the support of the Garfield Weston Foundation, developed a series of workshops that consisted of girls from various communities within the Toronto area.

“In these workshops we wanted to look at exploring different messaging. We wanted them to talk about what are important qualities to them, and we wanted to ask them what they thought about how women and girls are portrayed within the media so that we could talk about what stereotypes they saw being perpetuated and to ask them what it meant to be a girl,” said Malcolm. “We asked them if they could create their own messages, what would they want those messages to be?

According to Malcolm, all of the participants were not only excited about the activity, but really took to heart dissecting the negative messages that they saw on existing t-shirts, and then created their own shirts with more positive messaging.

With more than 100 girls participating and creating unique shirts with positive, empowering messages that they were proud to wear, the CWF selected four designs and have created t-shirts that are available for sale with 100 per cent of the net proceeds going towards helping girls in Canada move into confidence and leadership through the CWF’s Girls’ Fund.

“During the workshops the girls had that moment of consciously paying attention to the messaging on the t-shirts. It was an opportunity for them to really look and to think critically about the real life characteristics of women and girls, compared to how they are portrayed in the media,” said Malcolm.

“When girls perceive their value as coming from the way they look which is happening because of the messaging they’re receiving, it has an impact on their confidence which affects their physical health, mental health, and even how they do in school,” said Malcolm. “Girls who are confident feel that they have a right to have a voice, and when they can use their voice they are more likely to speak out against bullying, to speak out if an abuse has happened to them and are generally more comfortable speaking to an adult about the negative things happening in their lives. It has an impact not only on how they feel about themselves but how well they do in other areas of their lives.”

While the workshop is still in its pilot stages, the material is available online and Malcolm urges parents, teachers, or anyone working with youth to review the available information and to start having conversations about mainstream messaging and what it means in a real-world context.  The t-shirts, which also promote positive, confidence building messages can also be found and purchased online.

For more information on the As We Are campaign, to purchase a t-shirt, or to download workshop material, visit www.asweare.ca.