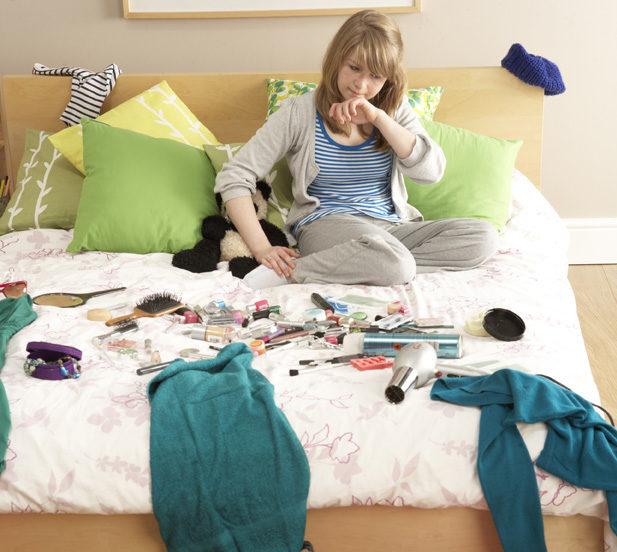 While picking up my prescription at Walgreens last week, the woman in front of me had two small children. I guessed their ages to be 4 and 2. It was around dinner time and everyone was in meltdown mode, including their mom. She apologized several times to the cashier and to me for the scene we were witnessing, but I just waved her off. I told her I have been in her shoes plenty of times and I completely understood.

When she left, the cashier said to me, “I’m glad mine are in high school now. That is such a tough age to parent.” I nodded in agreement but carried those words in my head into the parking lot and on the way home. Was parenting a teen any easier than a two-year-old?

Actually, there are a lot of similarities.

They have outbursts in public. Yes, they still happen. Of course, they are not exactly the same but they are still embarrassing. Recently I brought my daughter with me to the store to pick up somet things for dinner. “Why do we need that? I can just have cereal.” I told her we were not eating cereal for dinner. Moments later, I stopped at the end of the aisle where they had a display of cereal on sale. As I put some in the cart, my daughter mocked loudly, “I thought we weren’t eating cereal,” just as another woman was passing us. Thankfully she gave me a sympathetic smile and kept moving.

They are both picky eaters. When my kids were younger, I told them they had to eat a number of bites of something equal to their age before I would excuse them from eating it. Now, as teenagers, their busy schedule keeps them from the family dinner table. Every morning, I ask who will be home for dinner. ‘Maybe. What are we having?’ If they don¹t like what is on the menu, their practice, jobs or study groups coincidently overlaps with our dinner.

You still don’t get a full night’s sleep. With two year olds, you have fights about bed times, they have bed-wetting accidents, bad dreams and like to get up early. With teenagers, you have fights about curfews, you worry what they are doing while they are out, you doze restlessly on the couch until they get home and then you hear them gaming or Facetiming long after you have gone to bed.

You worry when they are quiet. Two year olds are loud by nature. They haven’t mastered their inside voices, they play act without fear of being made fun of and their toys are unnecessarily noisy. When they are quiet, they are probably up to no good. Teenagers are very similar. They come through the family living spaces like tornados  talking, playing music and with phone alerts going off constantly. They share stories about their day as they fill up on after school snacks and head upstairs to unwind. It’s when they enter the house quietly and go straight to their room without a word that you worry about what is going on in their world.

You always have to pick up after them. It’s understandable when your two-year-old misses the garbage, cleans up spills haphazardly hoping no one notices, leaves her towels on the bathroom floor and her handprints all over the place. Sadly, even after 15 years of reminding, you will still find her doing these things. The only difference is that the handprints are bigger.

But, at the end of the day, both a two-year-old and a teenager appreciate everything their parents do for them – even if they don¹t know how to tell you.

Pam Molnar is an essayist, mother of three and a terrible twos survivor.