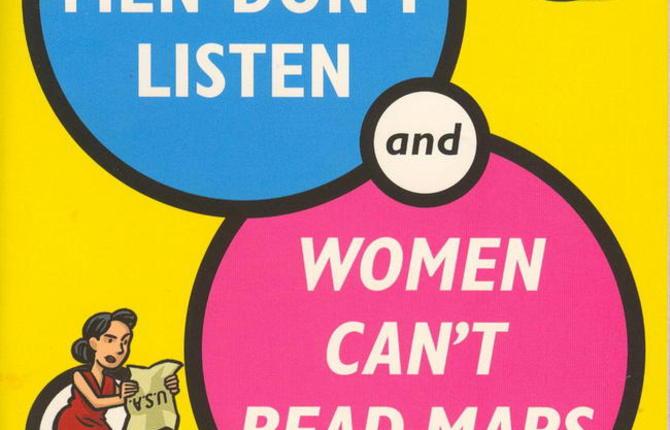 Questions that baffle us

Someone much wiser than I often tells me that one of the most important aspects of being a parents is taking time for our own relationships. Since that “someone” is my mother-in-law, I’m actually allowed – in very specific situations – to quote that source and not get myself into too much trouble.
While I would love to start quoting from Barbara and Allan Pease’s book Why Men Don’t Listen and Women Can’t Read Maps on a semi-regular basis, in the best interests of that relationship my mother-in-law wants me to save, I will keep my mouth shut. It will be hard, though, because for the first time in my life I am starting to understand some of the basic differences between men and women, and, for that matter, boys and girls. Believe it or not, there’s actually some science to explain why I’m incapable of finding the butter in the fridge and why my wife and daughter can simply open up either the fridge, freezer or any cupboard and immediately know where everything is. (It all has to do with peripheral vision, which is much better in women.) Physiological differences in our brains actually explain why us guys can’t multitask or watch television and have a conversation at the same time, too.
The Peases have done lots of research and do a great job of putting all that research into easily understandable terms and language in an easy, often humorous, entertaining writing style that will get you a long way through this book before you want to put it down. The book is full of bits of facts that make total sense and will enlighten many of us Neanderthal guys on why we seem to always be in trouble. (While I might suggest that if many wives read the book they might understand exactly why we do the things we do that drive you all nuts, I would never suggest such a thing – as the Pease’s point out early on in the book, “Men think they are the more sensible sex. Women know they are.”)
As you’ve probably guessed already, many of the differences outlined in the book are related to physiological differences, but the Peases also point to the huge societal changes we’ve gone through over the last 50 years.
“Seventy-four percent of working women and 98 percent of non working women identify the biggest failing of their husbands and boyfriends as a reluctance to talk, particularly at the end of the day. Past generations of women never felt this problem because they always had lots of children and other women for conversation and support. Now mothers who stay at home often feel isolated and lonely because their female neighbours are all likely to be at work.”
The Peases cover everything from those physiological and societal differences to the emotional differences between men and women that can lead to stress in relationships. Their book provides some outstanding insights that are sure to explain some of the stresses all our relationships have and, hopefully, will help alleviate some of those, too. Well, for us guys, anyway … since we’re the imperfect ones who need the help.

• Pease, Barbara and Allan, Why Men Don’t Listen and Women Can’t Read Maps: How We’re Dfferent and What to Do About It, Broadway Books, New York, 2000.

Breaking bread together while apart

Not your last day