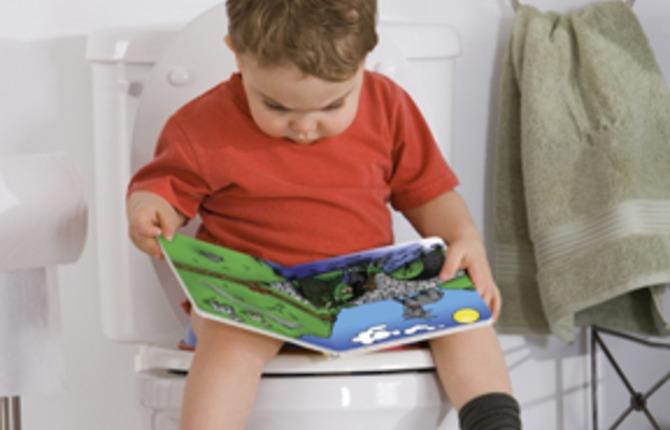 “No potty talk at the table,” I admonish my oldest during dinner.

“But he gets to!” she objects, jabbing a finger at her little brother, who is in the midst of potty training. I have to admit she’s right. Although adults hate potty talk in older kids, it is freely accepted, even encouraged, in the preschool set.

From the time they are babies, we parents are obsessed with our children’s bodily functions.  We count their wet diapers when they are sick, and check the contents of their dirty diapers to make sure the stools aren’t too soft or too hard.  We laugh about diaper blow-outs with our other parent friends, and start using words like “pee” and “poop” in adult conversation. And it only gets worse with the onset of potty training.  “Do you need to go pee?” we ask the trainee. “Go sit on the potty,” we encourage.

After years of listening to us, it’s no wonder that the kids like to talk about it, too. They are fascinated by their output and want to discuss it with everyone. In my family, animal comparisons are popular. “That poop looks like a turtle,” my daughter once informed me. Some kids practice their counting skills: “One, two, three, four poops!” they say before watching it swirl away down the toilet bowl.

Naturally, this leads to the discussion of body parts and gender comparisons.

“Sissy and Mommy don’t have penises, but me and Daddy have penises,” my friend’s son told his Grandma.  Another boy, after catching a glimpse of his mom dressing, said, “Hey, where’s your package, Mom?”

“Did you go bathroom, Daddy?”  my toddler used to ask. When Daddy answered in the affirmative, the boy continued, “Poop or pee?”  And he would keep asking until he got an answer. Later that summer, while on a camping trip, my son took to asking complete strangers the ultimate question. We were waiting outside the ladies’ restroom for my daughter when he started in.

“Did you poop or pee?” he asked women as they exited the facility. This earned us startled glances from some and understanding smiles from others.  The game ended when an older lady stopped and said, “I don’t believe that’s any of your business young man.” We moved away from the restroom exit after that.

Then there are those kids who like to hold court in the lavatory. Kings and queens of the bathroom are they.  They want us to stay with them, and bear witness to their glorious accomplishments.  They ponder important questions such as what will be served at snack time later, completely oblivious to the fact that they are filling the bathroom with the aroma of excrement. They rule from the throne, in complete command of the situation because we want them to be out of diapers, and they know it.

So we cheer them on, clapping one-handed while holding our noses, and join in on the potty talk.  We do it because we know, that like the penny my little sister once swallowed—this too, shall pass.

Bio:  Tiffany Doerr Guerzon is a freelance writer and mother of three children.  She only engages in potty talk when absolutely necessary.