See the circus through art 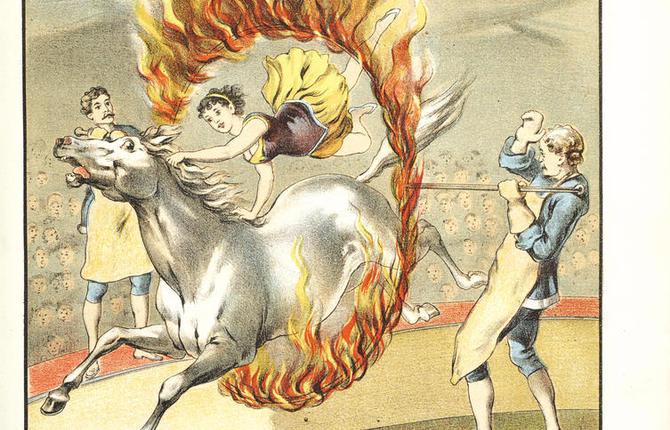 See the circus through art

The Circus Comes to Town (Toronto Reference Library) —  A lot of art and entertainment helps us escape the everyday. And when you see this collection of posters, pamphlets, books and artefacts celebrating circuses – all gathered from the library’s collections – you can’t help but think about the circus as escape. Performers work against the rules of gravity; animals dress up and do feats not expected of their species; and clowns alter their faces, bodies and feet to explore humour and emotion. And we watch, wishing we could break the rules too. Many of the images at this exhibition show off the fantastical elements of the circus. It’s no wonder so much of what’s display are illustrations: they can exaggerate what’s possible, even by trained performers. One 1911 ad, for instance, shows cars doing loop-de-loops through the air that would never be possible in real life.  Posters like the one from turn-of-the-century France and more modern examples from Denmark and the Netherlands are interesting not just because they’re about the circus, but because they show off the aesthetic of their time and place. The colours and flourishes of these contrast with early 20th century circus life here in North America. The posters are wordier without a trace of fantasy. The exhibit includes photographs from early Canadian circuses, and the focus is on horses and conservative manoeuvres. Seeing this smart mixture of all things clown, acrobat and big top is going to get kids asking to see a circus – it made me want to go. The exhibit’s main downside, I’d say, is too few artefacts. My favourite thing on display was a clown shoe worn in the 1940s and ‘50s. It’s a huge, triangular thing that is so outrageously unlike a foot.  I wanted to see more. The exhibit runs until October 5 at the TD Gallery at the Toronto Reference Library. 416-393-7131, torontopubliclibrary.ca.