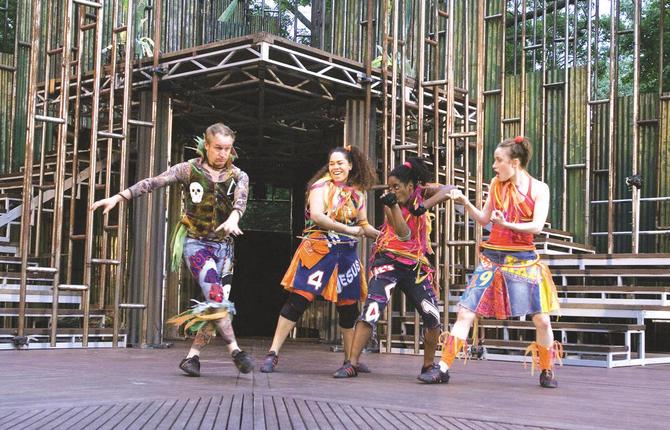 A Midsummer Night’s Dream (High Park) — Complain all you like that CanStage keeps remounting the same play for its annual High Park outdoor showing. Be even more annoyed that ahdri zhina mandiela urban-inspired version is being totally reprised this year, complete with 80 per cent of the cast. But the play — and this version— works, so why knock it? The abridged script runs just under two hours (my watch read 9:50 during the curtain call), there’s so many highlights of the play that adults and kids can latch onto, and it’s overall a fun story. The best parts, as usual, are the episodes with the players and their silly play-within-the-play of Pyramus and Thisbe. The players are wildly and colourfully dressed and their delivery of the synopsis of the play in a rap is priceless. All the players have clearly gone through a lot of work to create their own unique characters, and it’s hard to pick who’s the funniest. (If pressed I’d lean towards Emberly Doherty as Snug — her lion is wonderfully timid.) I actually found Bottom, who has the biggest role and usually gets all the attention, played by Matthew Kabwe, to be the least riveting. Acting is always an issue with the four lovers: you rarely get a cast where they’re all good. Maev Beaty as Helena steals the show. Sure, she’s got some of the best lines, but she hams them up and gets the most laughs, deservedly. Antonio Cayonne is solid as Lysander, and he’s the only lover with any sex appeal. I found Monica Dottor’s Hermia a bit shouty and Richard Harte’s Demetrius a tad flat. I think kids will really enjoy the three fairies with their hip costumes and propensity to sing most of their lines like they’re some kind of urban girl band. The play and the late hour are not great for kids under 10, but those older should enjoy this lively production. Bring snacks and a blanket to sit on. The Dream In High Park runs Tuesday through Sunday at 8 pm until August 31. Admission is PWYC ($20 suggested) and free for kids 14 and under. Sunday nights are family nights, with special programming. 416-367-1652 or canstage.com.