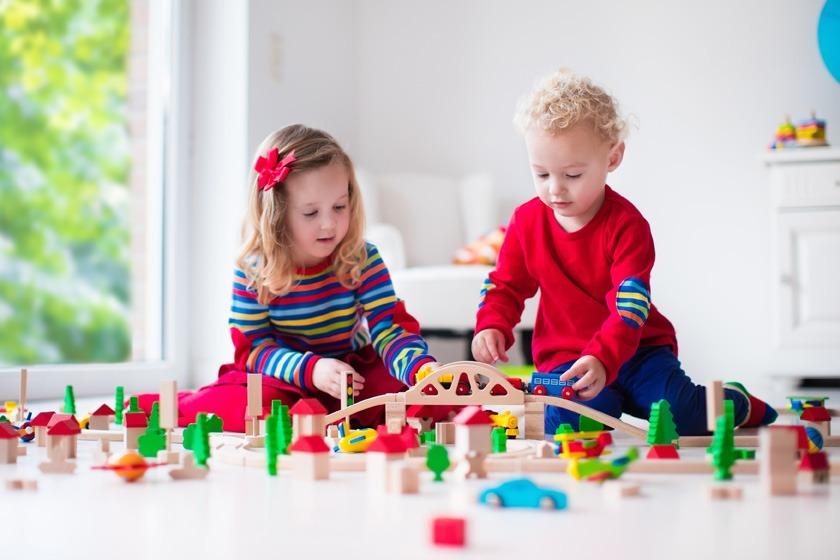 When Meag Diamond began touring potential preschools for her toddler son, Keats, she saw a number of beautifully laid-out spaces filled with immaculate worktables, inviting book nooks and inspiring art stations. What she didn’t see was unstructured, unhurried play — kids completely immersed in activities of their own choosing, absorbed in their own imaginations, creating with peers and engaging with nature.

That underwhelmed Diamond, who spent six years as a Montessori teacher. “Kids aren’t getting that long amount of time to enter into play, manipulating materials, learning about balance and cause and effect. It didn’t feel right to me to have my son in a program that would limit the amount of play and stop that flow from happening.”

She didn’t find a school that fit the bill — so she created one. With her husband, Jose Estrada, Diamond opened Tacoma Washington’s Chavitos Nature School, an outdoor Spanish immersion school, in the fall of 2015. In the preschool program for ages 2–5, children spend virtually all of the three-hour class session outdoors, deep in play. They climb trees, build fantastical forts with planks and plastic piping, dig for worms, collect pinecones and engage in the type of uninterrupted play that Diamond views as critical to learning and brain growth.

“We don’t call them in until there’s a natural break in the play,” she says. When play does slow down — typically about halfway through each session — the kids gather for snack and journaling.

Within a year of Chavitos’ opening, the school had a full roster of children (two preschool classes with eight children in each; and a class for kindergartners through fifth graders). The school maintains a year-round waiting list of families eager to try Diamond and Estrada’s model of play-based learning.

But does it work? The short answer: Yes. According to researchers, a child’s earliest learning is rooted not in formalized education, but in play.

From birth, children are “scientists exploring the world, building their understanding of the world through play,” says Amelia Bachleda, Ph.D., outreach and education specialist with the University of Washington Institute for Learning and Brain Sciences (I-LABS).

Now’s the time to dig out all those colourful toys, rattles and mobiles. In the first six months of life, bright, textured, crinkly or noise-making toys help spark brain-building play as infants fine-tune their senses. “Grasping for an exciting toy that’s just out of reach during tummy time, feeling different textures, looking at brightly coloured things — engaging the senses is important at this point in development when babies are first exploring their world and building fine motor skills and coordination,” says Bachleda.

The best toy in the room? You. During back-and-forth interactions with caregivers in games like peekaboo, infants learn about empathy and social dynamics. During these earliest play sessions, an adult’s closeness and attentiveness can help encourage cognitive growth. In a 2017 study published in the journal “Child Development”, 5-month-old infants who spent more time in mutual gaze — i.e., holding eye contact — with their mothers during play had longer attention spans at 11-months old than infants who spent less time locking eyes with Mom.

Child-led play is also important, even in infancy. When children lead their own play, they naturally gravitate toward uncovering something they want to know about, says Bachleda.

But parents may not always realize it. According to Bachleda, “Children are amazing logical thinkers, constantly running their own experiments” and testing newfound knowledge to see if people or objects act the same way consistently — as any parent can attest who’s taken part in a baby’s repeated experiment of dropping a drinking cup or spoon, then gleefully dropping it again as soon as it’s retrieved.

Research from Johns Hopkins University suggests that 11-month-old infants will pay more attention to an object that surprised them — like a ball that’s seemingly passed through a solid wall — than one that performs as expected. Another Johns Hopkins study found that when 11-month olds saw an object presented in an unexpected way — like a toy car flying in midair instead of rolling on the ground — they changed the way they played with that object. Babies who saw a floating car were more likely to replicate this scene in their play, reflecting a new understanding of the world.

Like scientists, babies are always using past discoveries to try to predict future events. In a 2015 study conducted by Andrew N. Meltzoff, Ph.D., a University of Washington psychology professor and an I-LABS co-director, and his colleagues, children as young as 24-months old showed an intuitive understanding of probability. By watching adults play a game, the tots were able to predict the strategy that would lead to success, even if the strategy was complex. This showed that simply observing adult interactions can help toddlers learn about cause and effect.

Coordinated play among preschool-age children helps bridge the gap between the simple back-and-forth game play of babies and the rule-driven play of older children. It also builds a child’s prefrontal cortex and offers kids vital lessons about themselves and the world.

“In coordinated play, children are playing imaginative dramatic games, learning how to tell a story through their actions, developing plot through their imaginative play or playing games with rules that require executive functions, like paying attention, flexible thinking, short-term memory and inhibitory skills,” says Bachleda.

A prime example of a coordinated play game for the preschool set: “Simon Says,” in which players act out a simple command, but only if “Simon says.” Players must recall the game’s rules and exercise flexible thinking because sometimes they’ll have to do the opposite of what’s requested or inhibit their reaction.

Research shows that this type of coordinated play helps build vital social skills such as gaining perspective, restraint, emotional regulation and cooperation. In a 2017 study published in the Journal of Experimental Child Psychology, Meltzoff of I-LABS found that coordinated movements during play, such as swinging in sync with another child on a swing set, enhanced cooperation in 4-year-olds.

In one 2017 study in the “Journal of Experimental Child Psychology”, researchers at Cornell University found that children as young as 4 could understand and apply complex social rules in a game setting, deciding when rules could be changed and who could change them. In the study, children determined that a game’s rules could be changed by the child who invented the game, but not by other players — only when a game was initiated by the group could the group jointly alter the game’s rules. This nuanced view of authority and social boundaries helps expand a child’s abilities to navigate the world at large, says Bachleda.

Such complexity among preschoolers doesn’t surprise Meag Diamond of Chavitos. Play provides an ideal platform for social education that can’t be matched by a formal curriculum, she says. “Social and emotional skills are created through conflict, turn-taking and kids not getting what they want in the moment, and learning to communicate.” Play, she adds, is the best way to instill that complex learning.

But perhaps the best part? The simpler pleasures of play: Kids collecting pinecones, digging for worms and exploring the forest, lost in thought. “When children get to play freely, they’ll grow up knowing more about their own passions and interests, and about themselves,” Diamond says. “It’s a tremendous gift.”

Malia Jacobson is a nationally published journalist specializing in health and family topics.